Mokoena had confirmed that one of the detector dogs had reacted positively to the luggage and the bag was opened up and searched finding the foreign currency.

The case in question, failure to declare money when departing the country which now has been handed over to the SAPS for further investigation.

“As part of our integrated operations, the possible smuggling of currency was successfully detected by our officers,” said Mokoena.

“We have noticed recently that passengers who normally use Ortia to try and take out currency, have started rerouting via other ports. This is why it is important that all of our units work closely together to prevent this from happening.

“I would like to commend the cooperation amongst the different divisions within Customs which led to this successful bust,” says Mokoena. 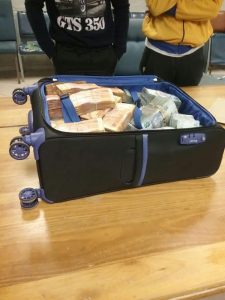