In South Africa, homosexuality is legal, Lesbian, Gay, Bisexual and Transgender (LGBT) rights are protected and same-sex marriage is legal. There are active and visible gay and lesbian communities in the major cities. Given South Africa’s liberal constitution and the fantastic diversity of holiday options, IT is a particular favourite among the gay community worldwide.

There are several consultants who specialise in creating tailor-made gay and lesbian friendly itineraries to South Africa.  The specialists work closely with tourism agencies such as the International Gay and Lesbian Rights Association ( IGLTA) in promoting gay travel to Africa because we know it is a safe and accepting country with some particularly gay-friendly hotels and lodges. Please contact us if you want specific details of consultants who can assist in tailor made holidays, specifying what your interests are.
What is on at various South African destinations?.

Johannesburg: The annual Jo’burg Gay and Lesbian Pride Parade, held at the end of September / early October, is the largest and oldest gay and lesbian event on the African continent, having first taken place in 1990. The event traditionally sees between 10,000 and 20,000 people taking to the streets in a colourful parade. Visit www.joburgpride.org for details.

Cape Town: The Cape Town Pride Parade usually takes place in February. It is well attended and very festive, although not as large as Jo’burg’s event. It is also usually accompanied by a week-long festival of events. Visit www.capetownpride.org for details.

Other cities/areas have smaller Pride events such as Soweto Pride, which is highly significant for its political impact, and Durban Pride.

Out In Africa: The Out in Africa International Gay and Lesbian Film Festival takes place at various times of the year in Johannesburg and Cape Town. Visit www.oia.co.za. 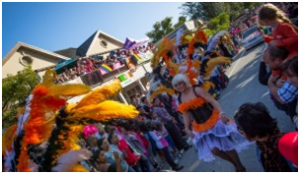 Every year towards the end of April the scenic town of Knysna in the Garden Route is donned in shades of pink to celebrate diversity and have fun doing it. You can expect oysters and champagne, parties, exhibitions, parades and plenty of action. Dress up and join the crowds.

Every year, this sleepy student town on the edge of the Garden Route plays host to one of the largest arts festivals in the world. There is always a great line-up of international and local artists. Upcoming talent is discovered here and if you are looking for great news shows, art pieces or paintings you will find it all there. Book in advance, dress warmly and bring your party hat.

Neighbouring countries: Remember that outside South Africa homosexuality remains illegal in many neighbouring countries, although this is rarely enforced. Nevertheless, we suggest discretion. There are gay communities in these countries but they tend to keep a low profile.