You could be coming into Cape Town for just the day to attend an event at the CTICC Cape Town. Several transport options are available to you in this case, to get from Cape Town Airport to the Cape Town International Convention Centre.

The first would be to make use of the airports many shuttle providers. Shuttles make their way around the city, stopping at predetermined points before getting back to the Cape Town Airport and starting again. Shuttles are available from early in the morning until late at night. Their times generally correspond with the timing of flights at the airport. Being a popular landmark in the city, the CTICC Cape Town forms part of shuttle routes. A spot on a shuttle can also be booked in advance, just to secure your spot. When it’s time to leave the Cape Town Convention Centre, you would

simply wait at the pickup point and be driven right back to the airport to catch your flight home.

The second option would be to take a taxi from Cape Town Airport to the Cape Town International Convention Centre. It is the more private option and there would be no sharing with other people, no extra stops and you would be taken directly to the ICC Cape Town. Passengers can leave the arrivals terminal at the airport and make their way to the taxi pick-up area and find a taxi to take them to the ICC Cape Town or one can be booked ahead of the trip which will have the driver waiting for you at the arrivals hall. In this case, payment can be done during the booking so it would not be something to have to deal with during the trip. At the end of the day, the driver will meet you at the Cape Town International Convention Centre to pick you up and take you back to the airport.

The last option would be to make use of the car rental agencies located at the Cape Town Airport. If you would be leaving the Convention Centre at any part of the day for other appointments, then having your own vehicle will see you sticking to a schedule much better. In this case it would be best to do an online booking from home, so you would get to Cape Town and settle a bit of admin before driving away a short bit later with the vehicle. Many car rental agencies also offer a chauffeur service from the Cape Town International Airport. Clients get to choose to be transported in a vehicle of their choice. It can be used as a point to point service from Cape Town Airport to the CTICC Cape Town or to have their sole service for the entire or half a day.

The choice of transport to get from the Cape Town Airport to the CTICC Cape Town would depend on the budget and time allowances of travellers.

If you would be staying in the city for a couple of days and majority of your time will be spent at the CTICC Cape Town, then it would probably be best to be based nearby to make the commute as short as possible. The Cape Town International Convention Centre is ideally located on the Foreshore area making it within close reach to the city centre and indeed to many of the major hotels in Cape Town. Some of these hotels near the Cape Town International Convention Centre include 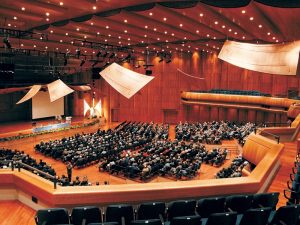 Getting to the Cape Town Convention Centre from your hotel can be done by a hotel shuttle, thereby negating the need to hire out a vehicle or take a taxi. There is also the option of walking to the CTICC. It is close enough that visitors do enjoy to take in the sights of the mountains while getting to their destination.

These hotels near the Cape Town International Convention Centre are also within easy reach to many other prominent venues in the city, making getting around in your free time that much more convenient. Booking a hotel in Cape Town can be done right when you are booking your flights on this site. Get access to all of the available rooms for your time in Cape Town. Narrow your choices down to those within your budget or those near the ICC Cape Town. Using our search engine allows you to book your room and only pay when you stay at the hotel. There are no added fees and most hotel booking cancellations and amendments can be done free of charge. Don’t wait until you get to Cape Town to handle your accommodation. You would not get the best room rates in addition to having to settle for a hotel based further away from the Cape Town Convention Centre.